Our visit to Canada 3 minutes

Canadian lobster is one of the main items in Pittman Seafoods’ product range. It’s the product we launched with many years ago and it continues to be a flagship product for our company. Each year, at the start of the lobster season, our purchaser Jennifer Vermeiren pays a visit to our lobster suppliers, either on her own or accompanied by colleagues from the sales or quality departments.

This year, in May 2018, Jennifer embarked on a tour of the regions of New Brunswick and Prince Edward Island, the cradle of the Canadian lobster industry.

She started her journey on Prince Edward Island, which is connected to the mainland by a long bridge that measures almost 13 km. This small island, which is almost five times smaller than Belgium, is located in the Gulf of Saint Lawrence, the site of the Canadian lobster season between 1 May and 30 June.

The first day started with a visit to Royal Star, our producer of cooked lobster and popsicle lobster. Royal Star is a cooperative owned by 175 shareholders, all fishermen, and it is the proud local population who work in the factory. Quality and sustainability are of paramount importance.

Francis, Chairman of the board of Royal Star, is a true fisherman. He learned the job from his father and then, some years ago, handed the baton over to his son. He looked very content; the season had started well, the catches were abundant and demand for lobster high.

We walked together through the factory that became BRC certified a few years ago. The continuous renovations and investments were clearly paying off. The atmosphere was busy – a lot of raw material had arrived but everything was organised thanks to the experienced staff. We could rest peacefully; our orders are being prepared with the utmost care.

The next day we visited Seafood 2000, right at the other end of the island. When we arrived we saw small traditional boats unloading a fresh load of live lobsters on to the quay next to the factory. This is where the UHP lobster story began for our suppliers, Gourmet Chef Packers. They invested in a UHP machine and a few packaging lines, and with their know-how of UHP technology, they soon became successful in Japan. Europe followed as a result of the exclusive cooperation with Pittman Seafoods and interest also grew on their side of the Atlantic Ocean. Despite the purchase of a second UHP machine, the capacity of the plant soon became insufficient. They had to invest in a second factory and recently in a third. These two plants are located on the mainland, in New Brunswick. 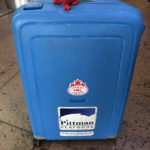 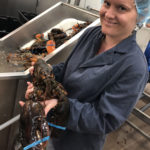 They all have high-tech UHP machines to process the live lobsters in an animal-friendly way under high pressure, so that the raw lobster meat is easily detached from the shell. This results in an incredibly easy to process product of superior quality, hardly distinguishable from live lobster. There is a wide variety of specifications and packaging options, ranging from whole lobster and lobster tails in bulk to half lobsters and lobster meat in individual skin pack or vacuum packaging.

The UHP plants all meet the highest quality standards and are BRC and/or SQF certified, and they are all extremely proud to display the Marine Stewardship Council (MSC) logo. Sustainability is a major factor throughout the entire lobster industry with new measures constantly being taken. For example, this year the minimum size allowed for a caught lobster has been increased, which means there are now hardly any lobsters weighing 275 grams and lobsters of 300 grams are becoming rare.

Sustainability is not only restricted to the lobster itself, but also extends to the entire ecosystem and to other animal and plant life. Since last year, Northern Atlantic right whales have been spotted on several occasions in the lobster fishing grounds, and they sometimes get caught up in the lines and buoys of the lobster traps. As this whale is one of the most endangered animal species in the world, some of the fishing grounds were closed this year. Occasionally, this led to a limited supply of lobster from certain regions.

On the last day of our tour, we paid a visit to Knocean. This factory was founded by Gourmet Chef Packers and Seafood 2000. Here they produce traditional value-added lobster products, such as lobster stock, lobster soups and sauces. Only pure, high-quality raw materials are used without additives or E numbers. This is perfectly in line with the vision of Pittman Seafoods and our local suppliers.